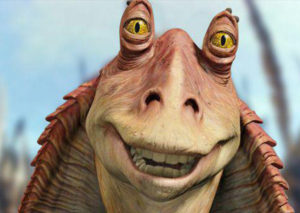 So first, let’s establish Jar Jar as a skilled warrior. He manages to convince us that he’s a bumbling oaf in the midst of pitched battle… even though he’s always incredibly, amazingly successful. Whether single-handedly taking down a battledroid tank, or unleashing a barrage of boombas on their front lines, or precisely targeting multiple enemies with a blaster tangled around his ankle (!!!), we simply roll our eyes and attribute it to dumb “luck.”
But is it? Obi-Wan warned us otherwise.
This is one of the main reasons we as an audience hate Jar Jar so thoroughly; he shatters our suspension of disbelief, because we know that no one is really that lucky. We dismiss it as a lame, cliched trope– the silly pathetic oaf who always seems to inadvertently save the day.
As we know, the Jedi themselves are inspired by Shaolin Monks, and there’s a particular kung fu discipline that Jar Jar’s physicality is purposefully modeled upon which allows him to appear goofy and uncoordinated even as he lays waste to his enemies; namely, Zui Quan, or Drunken Fist wushu. This discipline seeks to imitate the “sloshing,” seemingly random foibles of a drunkard, but in reality the staggering and stumbling is the use of bodily momentum, deception, and unpredictability intended to lure and confuse opponents.
That’s all well and good, but even if Jar Jar is a secret Drunken Fist boxing master, that doesn’t make him a force user, right? Well, it should at least make us suspicious of his character period. It establishes that his over-the-top, childish antics are a veneer masking a more complex character than we’re led to believe. Jar Jar is just as effortlessly stealthy as his Jedi counterparts.
In addition to this kind of highly suspicious physical “luck,” I also believe that we’re given enough clues to justifiably suspect that Jar Jar is also a master of Jedi Mind Control.
We hate the way Jar Jar influences major plot points for the same reason we hate his physicality- it messes with our sense of realism. Two experienced Jedi on a serious mission would never actually bring someone that stupid along with them. No character that idiotic would ever really be made a general. They certainly wouldn’t be made a senator. How could anyone like Jar Jar really convince the entire galaxy to abandon democracy? That’s ridiculous.
These things are just the political version of his physical “luck.” Inadvertent, seemingly comical bumbling that just so happens to result in astoundingly positive results. But what if it isn’t inadvertant, and what if Jar Jar’s meteoric rise and inexplicable influence isn’t the result of dumb happenstance, but the result of extensive and careful use of force mind powers?
If you watch the prequels with the idea that Jar Jar might be a manipulative, dark character, you begin to notice just how insidious and subtle his manipulation is.
Examples: Jar Jar tricking the Jedi into traveling through the planet core (so that they need him). Jar Jar carefully causing a scene so that they run into Anakin. Jar Jar constantly mocking Qui-Gon behind his back while Anakin is watching (so that Anakin learns disrespect for Jedi authority early on). Jar Jar telling an 8 year old child that the queen is “pretty hot,” fanning the flames of the child’s infatuation that is exploited later on. I could go on.
Now if you lend even the slightest credence to my above points, and acknowledge the possibility that Jar Jar might not be an idiot, you’re almost forced to conclude that Jar Jar Binks and Palpatine were co-conspirators. If Jar Jar is putting forth an elaborate act to deceive people, it means he’s not a fool… and if he’s not a fool, it means his actions in Episode II that facilitate Palpatine’s plans are not those of an unwitting tool- they are those of a partner.
Remember- Palpatine and Jar Jar are from the same planet, which in the scale of the Star Wars universe is like growing up as next door neighbors. It’s entirely possible that they knew each other for years prior to The Phantom Menace– perhaps they trained together, or one trained the other. And Naboo is a really strange planet, actually; remember those odd ancient statues with the third eye? Naboo is the kind of place an “outcast” Gungan might find a Sith holocron or two.

But that’s just speculation. Let’s stick to what we know– what we know is that even after Palpatine is elected as Chancellor, years after Jar Jar has been “tricked” into helping elect him, Palpatine still hangs out with Jar Jar in Revenge of the Siths. Why? Wouldn’t he be a constant source of public embarrassment? This is the same character who can’t walk five yards without stepping in poodoo or squealing like a rabid donkey, right? What use does he have now? Why is he still at the right hand of the most powerful person in the galaxy? Could it be that in fact Jar Jar is the most powerful person in the galaxy?

Should Go
The Rock is always fun, but shines as a scared nerd with no confidence. Karen Gillan is adorable as the socially awkward nerdy girl. Jack Black playing a self obsessed popular girl is laugh out loud funny. Kevin Hart as a shrunken jock with many assigned weaknesses is classic.
No one plays board games anymore, so what did the filmmakers do? They changed Jumanji into a video game. Simple, yet smart. This change not only made sense, it also opened the doors for the characters to possess and exhibit wildly over-the-top skills and physical abilities that would only make sense in a video game setting.
Gillan plays a powerful female badass exceptionally well. She even nails the necessary nuances required in playing a shy, unconfident student who is merely inhabiting the avatar of the female badass. Each star in the movie plays the embodiment of an avatar assumed by the high school kids after they are sucked into the Jumanji video game. I understand that the last sentence sounds ridiculous. That’s Jumanji. You have to tolerate a bit of ridiculous.  Kevin Hart is hilarious.  Jack Black should be in more funny movies. Dwayne Johnson is equal parts funny and charming.
Setting much of the film in a video game also excused an exceedingly simple plot. The movie embraces this. With all the funny lines, the best one comes when at one point someone asks a video game character in a car “Why can’t you just drive us where we need to go?”

You need to GO to this movie.

Should Go
She who must be obeyed LOVES a cowboy movie.
“Sometimes I envy the finality of death. The certainty. And I have to drive those thoughts away when I wake.” Rosalie Quaid (Rosamund Pike)
Hostiles is a heavily emotional experience that will make you think about it long after it is done. Despite the heavy subject matter, it has an uplifting message and some great performances from the main actors.
Forget the talk of the film being slow, this isn’t an action film or an old school shoot ’em up western, anyone looking for that should search elsewhere. There are some great action scenes; but Hostiles excels in setting the tone for an early American world where law and order rest on gun power. The cinematography is exceptional, meanwhile Christian Bale is superb playing an army captain who is seemingly tough and unflinching but shows an undertone of melancholy, Rosamunde Pike pulls off a great performance as a woman thrust into the ugly world of war and anarchy by a brutal attack on her family home in a scene that is exceptional and unapologetically shocking. Overall the film is about the futility of trying to civilize a wild land built on violence, and about the tragedy and the sheer pointlessness of conflict against fellow man.
Hostiles has a great message that is especially relevant in today’s dividing times. The film is about inclusion, and shows that we are all human no matter how evil one may seem.

Must Go
A great continuation of the saga. If I need to tell you about this movie then you might as well skip it. I just wish they would bring Jar-Jar Binks back. Jar-Jar Binks is the misunderstood, unsung hero of the Star Wars saga.

Go
This is not a movie laden with thought provoking questions or heavy social issues. It’s just good guys vs bad guys and it goes great with popcorn!
All the characters have their personality defined. The Flash is the nicest of all, he is the comic relief. Aquaman is like a rocker, a rebel without a cause. Cyborg is the most bitter, as he is a marginalized human-machine- alien mix. Batman and Wonder Woman are brilliant and this is the Superman that I wanted to see in the cinema.
The movie brings together what we all hoped for, a team. It’s fun, bright and energetic with a balance of seriousness.