You can tell when a major producer makes a movie because major stars scramble (eggs) to get in it. Just look at Dustin Hoffman, Scarlett Johansson, Robert Downey Jr. in relative small (sweet) rolls.

Percy (Emjay Anthony) his son is Twitter savvy and turns his father’s twitter feud into advertising gold during their road trip in a food truck.

Sofia Vergara (what a dish!) is the wonderful ex wife that ensures their shared son has a great relationship with his father.

This movie will have you leaving the theater ready for a second helping.

This is what happens when you let your sisters pick the play. I was so over the Marx brothers 50 years ago and here I am dragged into Cocoanuts … it was FABULOUS!!

The plot is irrelevant, something about selling Florida swamp land, a diamond necklace heist, and an arranged marriage. Who cares? As soon as Groucho (Mark Bedard) takes the stage the zaniness begins. “I’ll put blankets in your room for free,” he says. “There’s no cover charge.” He is constantly talking to the audience. Really we are part of the show. His wise cracks are very funny. Harpo (Brent Hinkley) always has his leg in someone’s arm and the things he pulls from his trench coat are amazing not to mention his adroitness at stealing things from everyone including the shirt off the sheriff’s back. Chico (John Tufts) is a perfect companion to Groucho is able to give as well as he gets. Zeppo (Eduardo Placer) is the romantic lead as the bellhop.

To say I loved this show would be an understatement. I would go again because every night would be different.

For me the best moments in the play were:
The song Always with Polly Porter (Jennie Greenberry a fabulous soprano)
The tale of a shirt – Carman style
And
The Cup Song here is a link to Anna Kendrick’s fabulous video.
http://www.youtube.com/watch?v=cmSbXsFE3l8.

Other Groucho quotes:
The secret of life is honesty and fair dealing. If you can fake that, you’ve got it made. 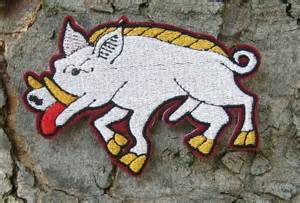 MUST GO  Nothing but spoilers here!

Richard Plantagenet, Duke of Gloucester, mass murderer. From the opening lines “Now is the winter of my discontent …” to “… a horse, a horse my kingdom for a horse!” You fall in love with the white hog. This deformed and withered man is one of the greatest warriors in England. Unfortunately, peace has broken out and he is bored. Thinking that with his unsightly body he cannot woo fair maid, he sets his sights on becoming King of England. Woe to his older brother George, Duke of Clarence, his two nephews (the Princes) by his oldest brother the King and various other dukes and earls that stand in his way. He climbs the ladder to the throne. Richard seduces the widow (he just made) with honeyed words over her husband’s coffin. So much for his insecurity about getting a girlfriend. He can justify his actions with “that was yesterday, we must think about tomorrow”. One of his greatest tricks is to talk directly to the audience about his plans and using sly smiles and humorous asides he seduces us too!

Finally at the battle at Bosworth field after having his third horse killed under him he is separated from his army and killed by half a dozen enemy troops. The last Plantagenet is dead and Henry the VII, a Tudor is declared King of England.

Shakespeare wrote this play a hundred and seven years after the events for a Tudor audience. Elizabeth the First, the last of the Tudors, was on the throne and was known to behead enemies so of course Richard was portrayed a vile usurper. I don’t believe it but there was that box found in the Tower of London stairwell with two small corpses in it!

Richard is played by Dan Donohue, you might remember him from a few years ago as Hamlet, another outstanding performance. For you non play going readers he is also a voice actor in Skyrim one character is Ralis Sedarys. He is also in many other productions.

Must Go
This is a fabulous sequel, actually better than the original. The relationship between Hiccup and Toothless is very sweet.
You will not realize that it is animation. The story and cinematography is so good you will think it is live action, except maybe all the flying dragons will tip you. The theater will have many squeakers but the story is adult enough for you. Enjoy.

Go
She who must be obeyed shocked me when she said that she wanted to see this movie. I think it is because we are working our way through Breaking Bad and this has Brian Cranston in it. Be warned, he is only in the first 20 minutes.
The movie is classic story telling. If you remember anything about the originals then you will probably see it here except it takes place in San Francisco instead of Tokyo. The CGI is incredible. Well I don’t want to give anything away, except too much kissing for me, if you like a good monster movie this is it. GO!
I agree go, SWMBO!

Go
Possible spoilers!
A complete rewrite of the Sleeping Beauty Story. The date rape (including a roofie) by King Stephan of Maleficent is disturbing as is the mutilation of her body. Prince Charming is marginalized as an ineffectual little twit (boys must have cooties). Crow (Diavel) is continually degraded by having to change into different animals at the whim of Maleficent. Even love’s true kiss comes from a surprising source. O how our society has changed.
You will be disappointed if you remember the truly evil fairy from the 1958 movie. This Maleficent is just a misunderstood softie. Angelina Jolie is very good as Maleficent. I love her lips. Elle Fanning is adorable as Aurora. The sets are beautiful and the actors are all good. The story is entertaining. You will be glad that you went to see this.
But why do they hate boys? Or is this the only way girls can feel empowered?

The Who’s Tommy
Seattle Musical Theater
Maybe Go
There are so many reasons not to go to this.
Band instruments out of tune, weak singing voices, awful sound balance, awkward dancers; but that deaf, dumb and blind kid sure plays a mean pin ball! The seventies were a long time ago and today’s youngsters just don’t rock like we did. If you know the story you can mostly follow it in this presentation. If you don’t know it is a slam of cult religions then pass it by.

To the motorcycle bullies at the Kingston Ferry Terminal at 9:10 pm Saturday night. There are four lanes coming through town, the two outside lanes are local traffic. The TWO inside lanes are to the ferry terminal. Your group cut me off not the other way around. Since only a moron argues with an idiot, I elected not to point out your error. Maybe you can get someone to read this to you since you cannot read the clearly marked lane indicators.