Go
Space horror film ala Alien.
We need to talk about Calvin, the first evidence of extraterrestrial life, a single cell collected from Mars (named by one of earth’s children through space to earth live beaming), is retrieved by a six-member crew in the International Space Station. Is the creature naturally aggressive, or was it because we started poking and prodding it that it was under the impression that it was being attacked and as such decided to defend itself. If that is the case then it seems as if their first encounter with extra-terrestrial life has resulted in creating an enemy, and a pretty powerful one at that.
Life works up until it’s final minute. I didn’t like the ending

Maybe Go
The Red Turtle is a calm, serene & surreal meditation on loss, hope, survival & mortality that’s simple on the surface but dense in themes, is wonderfully animated but ploddingly paced. It’s the sort of picture many artsy folks will love and the general public will find baffling and dull.
When the film begins, a guy becomes lost at sea and washes up on a lonely island. He works hard to try to escape his prison-like setting but several times a massive turtle inexplicably derails his plans. Eventually, he attacks the beast and nearly kills it…and soon repents of this and tries to keep the creature alive. Now here is where the film gets really, really weird (and the implications are disturbing if you think about it)….the turtle magically becomes a woman and the pair fall in love. Soon they have a son and the son seems to have a strong affinity for hanging out with sea turtles. Pretty weird? As to what’s next, see for yourself. But be forewarned…the film is slow…glacially slow. And, it’s certainly not for all tastes. However, on the plus side it is original, the animation very nice and the music quite evocative. It’s more a film for very select audiences…folks who can look past the strangeness and slowness of the film. As for me, I really couldn’t look past this and found the film rather devoid of fun and was a bit of a chore to watch.

NO GO
EXCRUCIATING TO SIT THROUGH. 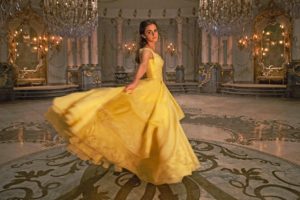 Emma Watson as Belle in Disney’s BEAUTY AND THE BEAST, a live-action adaptation of the studio’s classic animated film.

Must Go
I didn’t expect this movie to be so musical. Be Our Guest was one of the highlights of the film. The choreography in the song was stunning. I loved every second of it.
Emma Watson was absolute perfection as Belle, and she can sing. Dan Stevens (Matthew Crawley – Downton Abbey) rocks as the Beast, and he can sing. Gaston (Luke Evans) is a colossal jerk There are so many first class performers in this film such as Ewan McGregor who plays Luminere the candelabra, Ian McKellan who plays Cogsworth the mantle clock, the classy Emma Thompson plays Mrs. Potts and by default Belle’s conscience while she resides in the Beast’s castle. Other great performances were on display by Audra McDonald who plays Madame Garderobe, and I cannot forget Stanley Tucci who plays Maestro Cadenza and of course Gaston’s flunky sidekick the gay LeFou played perfectly by Josh Gad.
Everything about this movie is magical.

Must Go
Kong: Skull Island is the perfect monster movie. I love a monster flic!
A movie of titanic proportions starring Kong. An idealistic lone survivor whose ability is to protect the inhabitants from strange, and often vicious creatures that lurk about hunting for prey. These giant lizard things are genuinely terrifying. Tom Hiddleston (Loki) who plays John Conrad is a merc for hire who accompanies Bill Randa (John Goodman) to a place no human eyes has seen for over ten thousand years. An island hidden away in a thick stormy mist as a means of a deterrent for curious people. Among them are a military escort led by Colonel Packard (Samuel L. Jackson) and one photographer Mason Weaver, (Brie Larson). Together they unravel the mystery surrounding the island.
But the real surprise to me is the wonderful, fun, turn by John C. Reilly as an Air Force pilot who has been stranded on the island since WW2 . He finds the right balance in fun, energy, pathos and grit. He is, truly, the character I ended up rooting for in this film.
Stay past the ending credits for a peek at the sequel.

Go
It would be more appropriate to describe Logan as a western. In fact, it references my all time favorite western Shane. Even the ending lines echo Shane. No more guns in the valley.
“Joey, there’s no living with it,” Shane says to a teary-eyed Joey at the end of the movie. “The killing. There’s no going back from it. Right or wrong is a brand. A brand sticks. There’s no going back. Now, you run on home to your mother and tell her … tell her everything’s alright. There aren’t any more guns in the valley.”
When the pint-sized killing-machine X-23, who Logan protects for most of the movie, quotes those lines from Shane and turns over the cross on his grave into a little “X” it carries a genuine emotional oomph. Sniffles and tears galore.
Hugh Jackman is fantastic in the lead, giving arguably his best performance in the role. Newcomer Dafne Keen as Laura (X-23) was also fantastic and very believable in every second she’s on film.
Read my review of Shane, watch Alan Ladd and Brandon de Wilde in Shane and then go see this movie.

Terrific
This is a real musical with great songs and terrific dancing, so unlike La La Land which had neither.
The Pajama Game features hit songs including “Hey There,” “Hernando’s Hideaway”, “Steam Heat” and “There Once Was a Man”.
Best dances, Steam Heat, Hernando’s Hideaway and several tap numbers.
This is entertainment!

Go
If you mash up Guess Who’s Coming to dinner with Stepford Wives and add a dash of Freddy for scary laughs, then you’ll understand this movie.
Chris (Daniel Kaluuya), is a black dude going out with a white woman, who takes him to see her family. He’s worried about them flipping out when they find out he’s black. He’s got bigger things to worry about.
His white girlfriend, Rose (Allison Williams) takes him to her parents’ home way out in the woods. The scary tropes are all there including strange servants and wacky psychologist mom (Catherine Keener), all overseen by equally off-center neurosurgeon dad.

We have NEVER been given a hero of color in horror; “The Black guy always gets killed”. This movie is very good.